If you’re having a hard time in college, you may have thought about whether or not it would be a good idea to drop out. For some people, college can feel too difficult, prompting them to wonder whether college is even the right choice for their needs, and student loans can be overwhelming. However, especially if you’ve already been in college for some time, dropping out probably isn’t the right option. Here are some ways that dropping out of college might actually make it tougher to pay off your student loans. 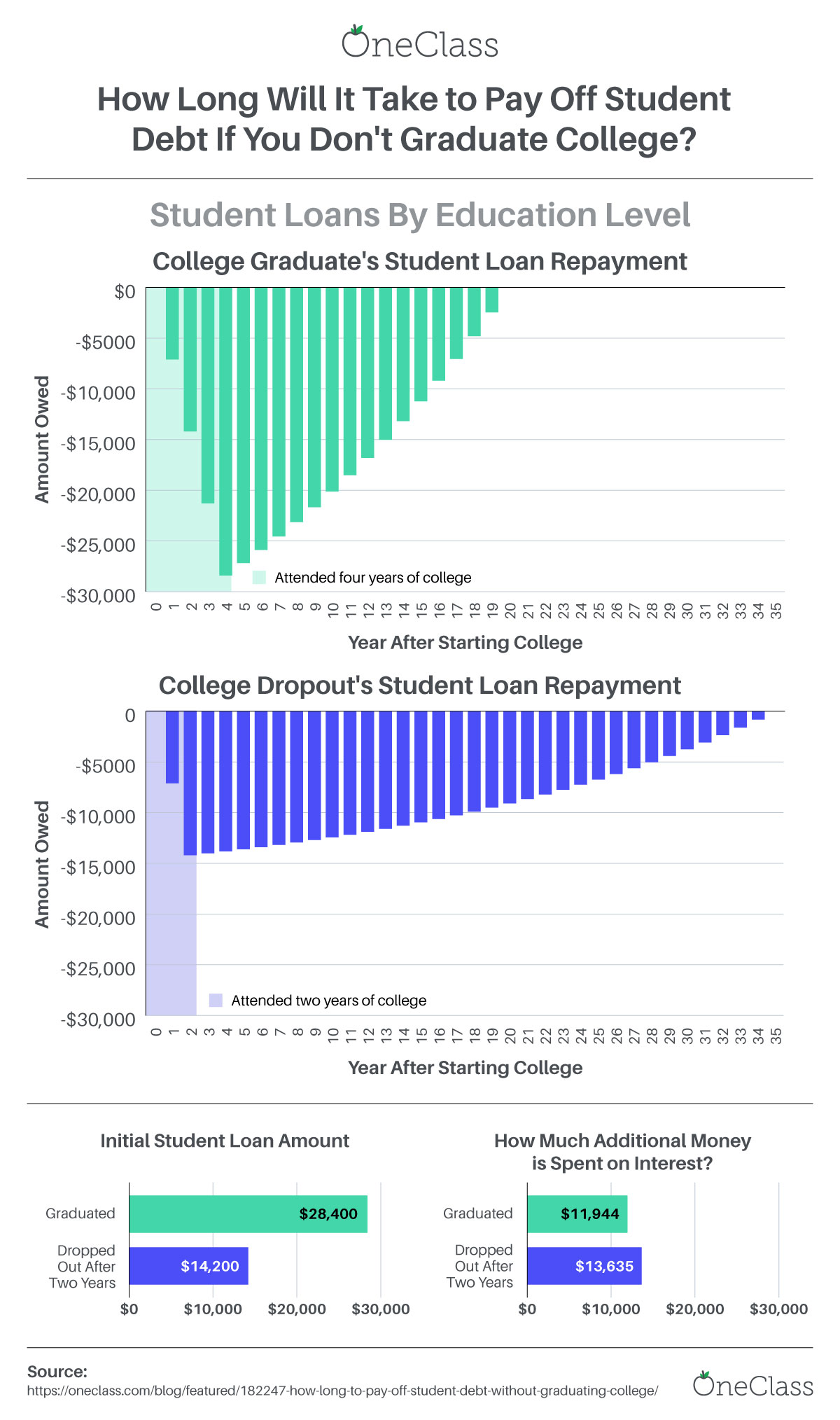 How Long Will It Take to Pay Off Student Debt If You Don’t Graduate College? Created By:   OneClass

Interest costs are possibly the most frustrating part of paying off any loan, and student loans are no different. A student who drops out after two years will have taken out a $14,200 loan on average. However, over the payment period, this student will spend about an additional $13,635 on interest, which is nearly twice the initial loan. It typically takes students who have dropped out substantially longer to repay their student loans, which significantly increases the percent of interest they pay.

It’s also important to look at the income assessment for college graduates versus non-graduates. According to the U.S. Bureau of Labor Statistics, those who have “some college” make $41,704 yearly on average, while those with a four-year bachelor’s degree make $62,296 yearly on average. That’s a 49% increase in average income, which means you’re much more likely to be able to direct more money toward paying off loans. Instead of just making minimum payments, you may be able to make substantially larger payments.

These two elements combine to form this last element – how long you’ll be paying off your student loans. For someone who graduated from college, on average it takes around 19 years to completely pay these loans off. Of course, this sounds like a lot, but in truth, it’s less than it will take for you to pay off student loans if you don’t graduate. Despite the relatively lower debt, those who don’t finish college often take up to 34 years to pay off student loan debt completely. Though it might seem counterintuitive, finishing college can actually make it easier to repay your student loan debt.

How to Keep Going in College

When you’re in college, it can be difficult to find the desire to keep going. Whether it’s because you want to pursue other options, because you find college very difficult, or because you’re interested in saving money, college is a hard thing to stick to. This is one reason about 40% of college students end up dropping out.

However, it’s possible to succeed in college. Finding study resources can be a crucial part of success – if you’re able to discover ways to study more effectively, you’re more likely to get through your classes. There are many third-party study resources that allow you to catch up even if you missed part of your class, and they can be a great way to succeed even when you’re worried about school.

Dropping out of college can seem like a good option, especially if you’re worried about your classes and seeing student loans pile up. However, dropping out can actually make it take longer for you to pay off your loans. Instead, consider looking for study resources and other ways to succeed in school; you’ll likely pay off your loans more quickly.